How Much Will I Pay?

It’s a simple question. However, you won’t find the answer to that question on the District 7 website.

Instead, the question in their FAQ page is “If the referendum passes, what would a 10 mill increase cost me in taxes?”

You might think that they are about to explain how much you will actually pay if the referendum passes. This is not the case. They are instead explaining “a 10 mill increase” ONLY and making it seem as if it was dependent on the beginning of the sentence, “If the referendum passes,”. It is not.

Whether the referendum passes or not, the definition they give below that question only defines what millage rates and taxes mean in dollar amounts, NOT HOW MUCH YOU WILL ACTUALLY PAY.

The question could be worded thus, and the answer would still be the same:

“If the referendum DOES NOT pass, what would a 10 mill increase cost me in taxes?”

Don’t be fooled by mind games and tricky language! 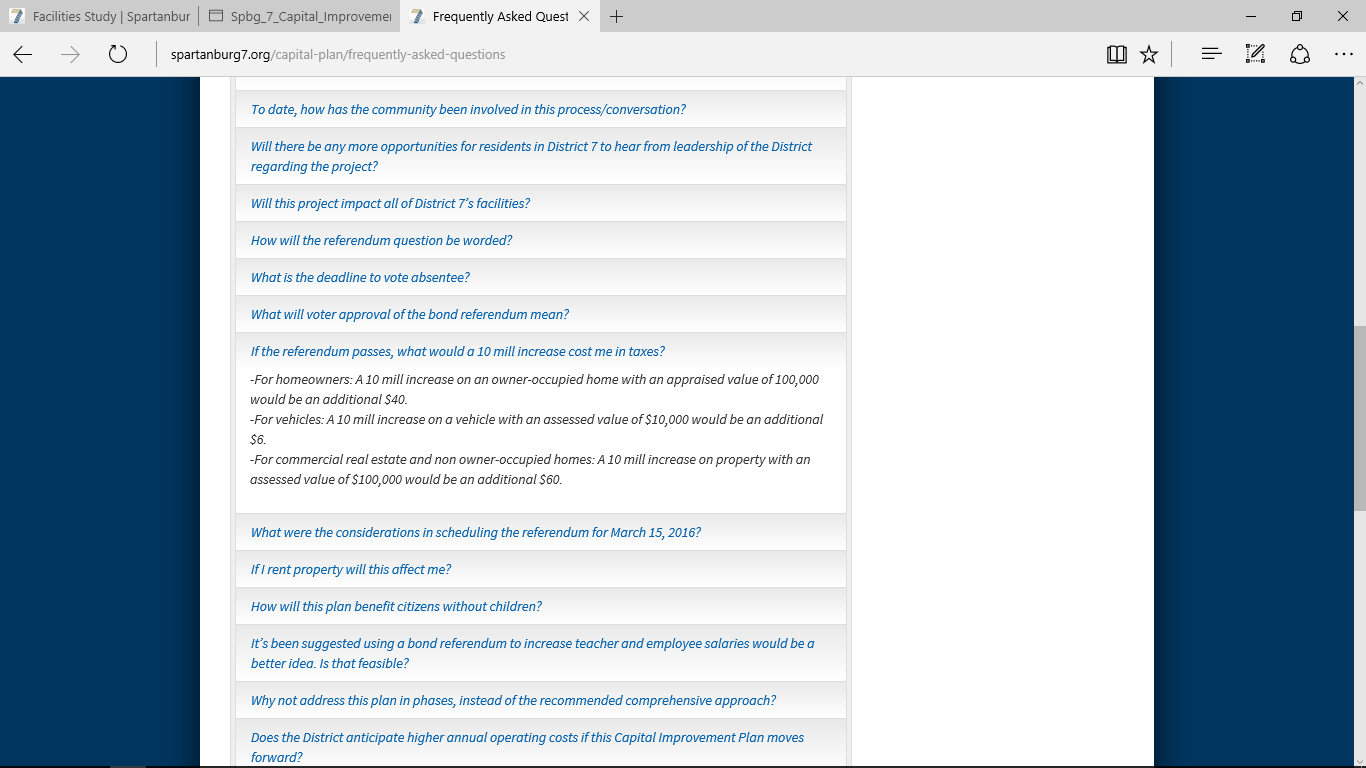 Now, for the important question, How Much Will I Pay?

The numbers that you see in printed sources (typically our local newspaper) and online (Frequently Asked Questions) are;

Those are the numbers that likely stick in your mind.

Simple math will show you that can’t possibly be the case. Even if the referendum were $185 million, which of course it will cost much more than that with interest, how many houses, cars and businesses would it take to add up to that number?

We know the plan to pay the referendum extends until 2047, so stretched across 30 years (and not even counting interest at this point!) means we’d have to tax:

Or some combination of the three.

Well, we know that’s not the case. According to the most recent census, there’s about 25,000 homes, less than 1,000 businesses, and less than 100,000 vehicles in District 7 (source – Spartanburg County Assessor’s Office).

Wow, those numbers aren’t even close!

Figuring in interest, it gets much worse. District 7’s own projections show about a 5% interest rate, although you don’t know the exact interest rate until the bond is sold, and many municipal bonds are sold around 2.5% to 3.5%.

The final number lands somewhere between a third of a billion and half a billion dollars.

So for the question, “How Much Will I Pay”, the answer is:

MUCH MORE THAN YOU’RE LED TO BELIEVE.

Citizens for the Children's Future